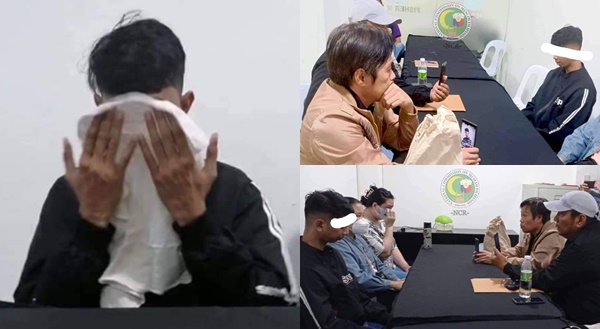 Ayon sa liham ni Padilla sa pamunuan ng mall, “While the audio from the said video is proof that the contestant was acting in good faith and that there was no intention of offending anyone, we cannot undermine the fact that the act of using the blessed structure as a pet stroller had hurt the Muslim community.”

“May this experience, however unfortunate, be an opportunity to widen perspective and promote understanding of various religious beliefs and practices, befitting the great intent for which this Holy structure is built.”

“With the cooperation of the mall management represented by its Marketing and Tenant relations Manager Angela Miranda and her staff, the NCMF-NCR was able to reach the contestant identified as Ronald Flores who voluntarily attended the meeting accompanied by his family and a representative of his barangay,” ayon naman sa Facebook post ng NCMF.

“During the meeting, Flores explained that he had no intention to deliberately offend the Muslim community. He alleged that the country he represented was not his choice but was merely assigned to him by the organizers and that due to sheer lack of time having given only two days to prepare and with his pet getting sickly, he was not able to do proper research for the costume and props.”

“He also alleged that when he Googled the country assigned to him, the results repeatedly yielded images of the Holy Ka’aba. Asked about the short spiel read by the host during his exhibition, he alleged that the same was copied in toto from the internet on the day of the event itself, giving him no time to review the same.”

“Flores, likewise, confirmed that a male Muslim passerby warned him that the props he used is prohibited in Islam to be used as such but that the warning came after his portion. He said that had he been warned before his part, he would not have continued his walk.”

Sa pagpapatuloy pa ng ulat, “Live on Facebook, Flores profusely apologized to the entire Muslim Community for the apparent disrespect to the Muslim populace all around the world caused by his carelessness and promised that it will never happen again.”

“For the NCMF-NCR, Dr. Esmael explained to Flores and his family the gravity of the offense that was committed by shedding light on the significance of the Holy Ka’aba in the Islamic faith. Meanwhile, Atty. Abdullah explained that the meeting is merely an initial step as report will still be made and submitted to the NCMF Central Office for appropriate action.”

“Nonetheless, she assured Flores and his family that their voluntary act of apologizing and showing remorse is already a big step forward.”

“For its part, the mall management reiterated its deep regret and apologies to the Muslim community which it already expressed through an Official Statement dated October 4, 2022. It likewise expressed its openness to the possibility of establishing a Prayer Room for Muslims in the said mall after Dr. Esmael shared this being one of the goals of the Commission.”

“There are still a lot of people reacting negatively to the apology. Islam’ doctrines and Prophet Muhammad pbuh dictate that Muslims have to be patient and forgiving, especially to those who have little or no understanding about the religion. Islam is peace. It is haram in Islam to curse another human being, regardless if he is a Muslim or not,” ayon pa sa NCMF.

“To our Muslim Community,”

“We have reviewed the post from the concerned netizen regarding the presentation made by one of the participants of the My Best Friend’s Treat: Pet Universe 2022 contest at the Fisher Mall Atrium yesterday, October 2, 2022. We would like to thank the netizen for pointing out this oversight and for the others who voiced their opinion.”

“We understand that our negligence has angered and caused much pain towards our brothers and sisters of the Islamic faith. This was a failure of our internal screening procedures and an embarrassing show of our lack of awareness of and sensitivity towards other cultures and religions, something we are truly ashamed of.”

“Fisher Mall aims to always support and respect the beliefs of every religion. While it is too late to change what happened, we acknowledge our carelessness that led to this grave error and aim to do better in the future. We assure everyone, but particularly our Muslim brothers and sisters, that we will be enhancing our screening methods to ensure that this or any other offensive incident will not happen again.”

“We will be creating stricter requirements for our future initiatives, while keeping in mind the need to be respectful to all religions and cultures. We will also be seeking the guidance of the National Commission on Muslim Filipinos for any advice or policies that they may have in place. And lastly, we will also keep relying on you, our community, to keep us informed, to keep us always alert, and to help us always be better.”

“We apologize for the hurt and outrage our lapse has caused. We will always strive to be inclusive and to make our Mall a safe space for everyone, and we will always listen to our community. We thank you for your understanding regarding this matter and hope for your patience as we make improvements to ourselves.”