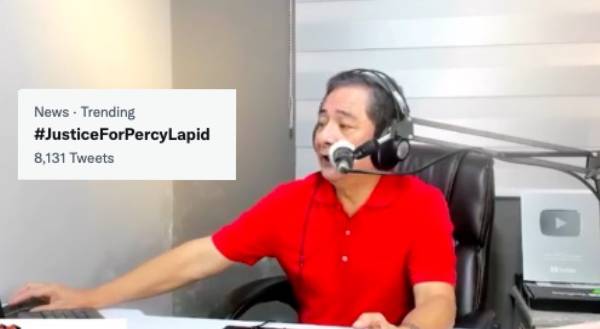 “Percy Lapid’s killing confirms the truth behind his exposés. Now is the chance to do drum beats of Justice. Justice for the speaker of the truth. Justice for Percy Lapid.”

“Your fire will never be extinguished. Fellow journalists will keep it burning.”

“Atty Leni Robredo believes there is no reason to kill and silence journalists in a democratic nation.”

“Whoever is behind this. Your soul is already burning in hell.”

“Not even 4 months in office and journalists are getting killed again under a Marcos-Duterte regime.”

“MOM IS LISTENING TO KA.PERCY LAPID’S FB VIDEOS ATM, CANNOT HELP BUT BECOME EMOTIONAL… YOU WILL BE MISSED, KA PERCY”

“Maybe we should tell politicians to stop being onion skinned and stop having their detractors killed instead of passing the blame to those exercising their constitutional rights to free speech and press freedom.”

“HIS HIGH PITCH laughter at the end of his stinging punchlines will be missed the most. May the life you sacrificed be rewarded a thousand fold, Ka Percy.”

“Let’s all honor and respect Ka Percy, our genuine Filipino hero by attending his wake and funeral.”

“Percy was that broadcaster that made boring political tidbits juicy- he wove them all together by the time the show ended. He was factual and had an infectious laugh (made my diswashing less drab)”

“Naiyak ako… shocked to the core… ang sakit sa dibdib. Ka Percy was one of the fiercest journalists I’ve heard/ seen and this is great another loss for #PressFreedom”

“This is what Journalism in the Philippines is. If you are not ready to die, then I suggest you keep yourself safe. But that is the sacrifice that me and other aspiring Political Journalists are willing to take, in order to spread the truth to this country.”

“He talked tough and hit hard! Is EJK back now but the targets are media and critics of govt? The real victim in this kind of attack is TRUTH. And eventually, the people.”

“They are killing journalists who aren’t afraid of telling the TRUTH with integrity and their heads held high. While vloggers and fake news spreaders run free. Infuriating!”