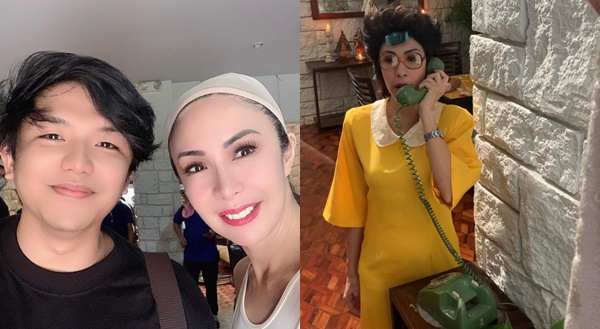 “The cat is out of the bag, I play ‘her character’ in Maid in Malacañang that will be shown on August 3. For legal purposes, I will not mention any name but will refer to my role as ‘her character’ as I do play one of the characters of a movie.”

“First and foremost, the question that people will raise is why did I accept ‘her character’. I have always wanted to do a project with Direk Darryl Yap as I am a big fan of his works as a writer and director starting from ‘Jowable’ to ‘Gluta’ to ‘Revirginized’ that starred my idol Sharon Cuneta.”

“I must say, Direk Darryl Yap is indeed the most brilliant director of his time. Yap told me, ‘We want an intelligent and educated lady to play her role’. And that was the selling piece – Direk Darryl Yap plus the requirements to play ‘her character’. Then, I received the script.”

“My heart started pounding when I saw the line, ‘Get them out of the Philippines’. In my mind, this was something I did not know, I haven’t read, this was something new. And anything new will receive only two reactions, positive reactions and negative reactions. I had to physically prepare myself. I was one hundred percent sure I will be bashed for performing ‘her character’.”

“As an actress, will this be worth it? Before I fully accepted the role, I wanted to hear it from the creative producer of Maid in Malacañang, I wanted to know if what was written in my script was the truth. So I personally texted Senator Imee Marcos and she texted back in Filipino, ‘Yun daw ang sabi ng mga Kano.’ (That is what the Americans told us).”

“With what Senator Imee told me , I began to realize, all this time, what I have been reading in historical books and print media and watching and listening on television and radio during the eighties and nineties was the other camp’s side of the story because they were the ones’ sitting in the administration.”

“Now that the coin has flipped, let’s give a chance for the Marcoses to tell their side of the story, the way they know it. Isn’t it just fair for us to look at both sides of the coin before we cast our judgements? Lastly Direk Daryl Yap would like to remind everybody that, ‘Maid in Malacañang is NOT a bio-pic. This is a story of a family.'”

“To close this article I would like to quote Senator Imee Marcos during the presscon ‘Art should disturb, it should confuse, it should provoke, it should should seduce and it should agitate. Ang sinasabi lagi kapag nagtutunggali, Mag-usap kayo. Balikan ninyo at pag-usapan natin ang pinagsimulan.”

“Hindi lamang ito isang pelikula, it is a beginning of a national conversation that hopefully will bring us to genuine unity,” pagtatapos ni Sanchez.