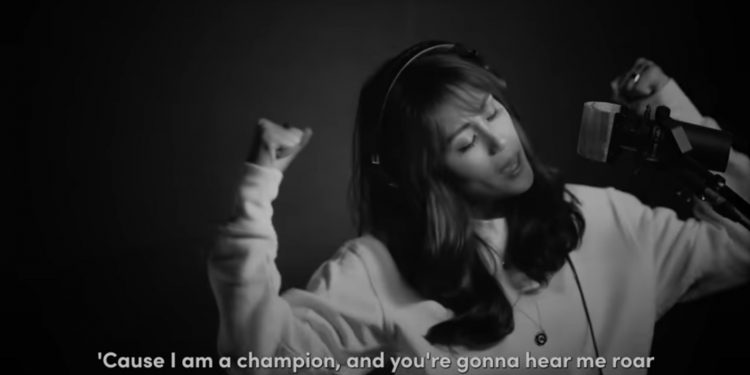 “I love how she responds to any kind of persecution. She chose her battles wisely and the way she enjoys herself in the midst of culture cancellation really fascinates me. A woman of God indeed. God bless you Toni.”

“Her vocals is absolutely extraordinary. I don’t have background about the technicalities of the musical realm, but (for me) she’s sailed through the song with upsurge of emotions. Her rendition of the song is soooo commendable.”

“You’re an inspiration for bravely standing up for what you think is right.. Shame on the people who sold their dignity and patriotism just to keep their careers and jobs.”

“I will always admire her courage. She stands with her truth.”

“I remembered Toni singing this song while the other side is trying to mock or imitate her. Imitation is the best compliment. And exactly right after the proclamation, pinost niya ‘to. Mamimiss ko mga rally ng UniTeam with BBM & Sara and also the icons, Mrs. Toni Gonzaga Soriano & Andrew E.!”

“To all the bashing that she got, this is now Toni’s response! Roaring like a tiger. No matter how they try to put her down, she always has her way to go up.”

“”You held me down, but I’ve got up” Goosebumps!!! Like from the start when she announced that she will going to support BBM, this woman experienced a lot of bashing and even wishing her to be dead and those bashers hoping her husband to cheat on her but you prove us what an UNBOTHERED QUEEN should be and can do! Thank you for standing up Ms. Toni! Such a QUEEN”

“Iba talaga si Toni G. Despite of all bullying, she still prove it! Galing! Life and death is in the power of our tongue and yet she chose life! Grabe yung power of declaration!”

“This song is the best for “VICTORY”. When I heared this song TAGUMPAY ng pagkakaisa ang laging nananaig. Kudos team UNITEAM and to you Ms. Toni♥️”

“” I went from zero to my own hero, you held me down but I got up ” I am so proud of you, Ms. Toni for standing up and for being strong. I ‘ll pray for God’s guidance in every thing. Stay humble!”

“You have remained calm and regal even with all the insults and bashing you received. You shined amidst all those negativity thrown at you. And now you will shine more than ever. Let them her your ROAR Ms. Toni.”

“The perfect victory song. Galing mo talaga, Celestine! Just saw a magazine cover of yours recently and they defined you as “Graceful and Grateful,” and I couldn’t agree more. You’re phenomenal!!! Thank you for keeping your grace despite the pressure and hurtful words they’ve thrown at you. Thank you for being a real good example. The only way to win is to fight with grace and honor. I’m having goosebumps now listening to the lyrics of that song. Great job!!!”

“Good to hear a vid of Toni singing. This is something I have not seen her do for quite some time. Walang kupas pa rin. Keep up. Much Love!”

“Congrats to us Toni! Lodi ka tlga pinanindigan mo what you believe is right and now you’re about to reap what you sow”

“She knows how to fight her battle! See the diff. Of other artist.. ♥️♥️♥️ Love You ♥️Toni G more!”

“ngayon ko lng mas naintindihan ang kantang to.. before, i thought it is just a plain song but now, it’s the perspective of the song that makes it more meaningful. Thanks Ms. Toni for making us realize everything through this song”

“Thanks for taking a stand Toni, you’re such an inspiration to everyone especially to women.”